This exceptional new painting is one of Ross Watson’s most accomplished and detailed large scale paintings to date. The work explores the narrative of Time, referencing Simon Vouet's Baroque masterpiece Time Vanquished by Love, Hope and Fame, 1645.

An astonishingly dramatic scene has been skilfully developed and reinforced by Watson’s extension of the left side of the composition of the classical picture. The addition of James, who hovers suspended, transfixed by the drama unfolding below brilliantly transforms Vouet's semi circular composition to a dynamic complete circle.

During the lock downs associated with the pandemic, Watson has utilised this period to reflect. Returning again and again to the themes of Time, Love and Hope, This led to the painting’s concept and narrative which materialised during Melbourne's lock down last October as he spotted the model James in a park exercising on Olympic rings.

Vouet's allegorical composition depicts six classical figures. The foreground features an elderly man representing Time. A cherub torments him pulling at his wing, and Love and Hope in the centre pull at his hair and wing. Above them Fame calls for eternal public and social recognition from her horn. Watson's introduction of James, with his athleticism, hope and ambition is the embodiment of Youth. His life, as with his gaze, in full swing, stretching out ahead of him as he observes the mythological scene. The introduction of this youthful figure, contrasts the finality of Vouet’s original composition and reimagines a narrative of life that is cyclical and continuing.

A Parisian, Vouet began his career in Italy. Similarly to Watson, his earlier works reflect the influence of Caravaggio, and features the characteristic dramatic contrast in light and shadow present in this work, which is considered one of his greatest.

Reviewing Watson’s past classical works, Time possesses not only exceptional composition and theatrical drama, but also the most varied and richly dazzling colour palette. As the artist approaches his 60th year, this arresting and important artwork marks the entry into the late stage of his career.

These are our most collectable editions.

All available Edition Canvases are in an edition of three with two artist's proofs. They are hand-signed and numbered by Ross Watson on the reverse (non-image) side of the canvas.  Your prefered edition number to purchase can be selected from the top menu.

An Artist's Proof is the same quality as the editions numbered 1-3, and is the first print produced when colour and quality is perfected. Each canvas is of equal quality and value.

Use of glass in framing is optional, eliminating potential of reflections when viewing your canvas.

The sizes provided are the unframed image size. The canvases are printed with a generous white border and we recommend they be placed on a wooden stretcher before adding a decorative frame. 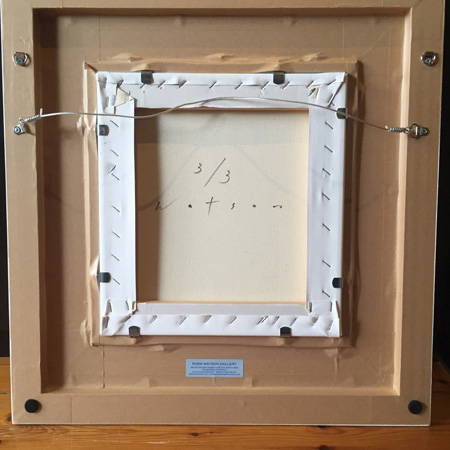 We offer FREE worldwide fully-insured postage and packaging for all Limited Edition Prints and Photography.

All Limited Edition Prints, Canvases and Photography are sent unframed and packaged in re-enforced postal tubes.

All items will be shipped within 3 business days of receiving payment for your order. Delivery times can vary, but purchases are generally received worldwide within 5-7 business days from dispatch.

Items to be sent domestically will be sent using registered Australian Post. International orders are sent using international postal Express Mail Service (EMS). Tracking details will be provide upon dispatch of your order.

"I'm amazed at the way the colours and detail are so close to the paintings. How do you do it?  It looks incredible."
Jason Devonshire, Melbourne, AUS
26 January, 2019

"Thank you for getting the prints to me in time for Christmas. I really appreciate the extra help you gave."
Rick Johnson, San Francisco, USA
22 December, 2018

"I'm pleased I decided to go with the canvas edition.  I really like the texure it gives to the art and your framer was so helpful."
David Dunstan, Melbourne, AUS
4 September, 2018

"Ross' gorgeous prints are hanging in the hall and everyone who visits just loves them! Thanks Stephen for all your help."
Evan Carsley, Boston USA
18 September, 2017